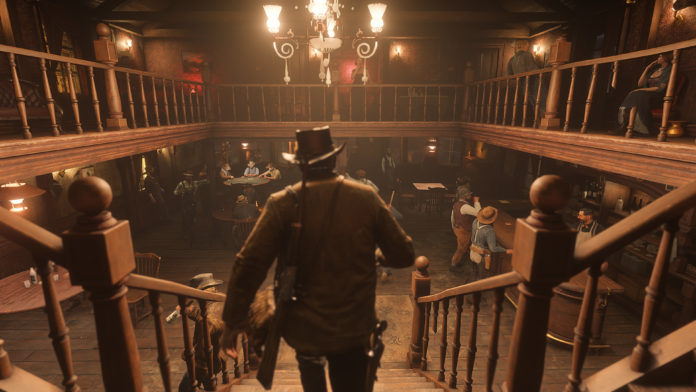 1. Drugged and Robbed by a Brother and Sister

There is a pig farm where you meet a brother and sister (and couple) that are friendly enough to invite you in for a drink.

If you take a sip of the drink, you can immediately tell that it isn’t just whiskey. But who can resist the curiosity? A second swig and you’re knocked out.

Or in this case, drugged and robbed the cowboy.

You can go back to exact revenge and get your money back, plus there are a few goodies littered around the house.

At some point, you’ll stumble across a half-dead stranger with a badly wounded arm. You can stop and help the man by taking him to the doctor.

While you can simply drop the man off and collect an honor reward, things get really interesting if you stick around instead.

The doc warms that “you might not want to stay for this”, but trust me, you do.

After a brief assessment, the doc uses a bone saw to chop the poor guy’s arm right off. He waves the severed arm around like wand for a second before tossing it in the bin.

Two escaped prisoners ask you to shoot their prison shackles and free them from an endless 3-legged race. The two prisoners spend the whole time bickering and insulting each other, so would think this would be the end of the road for this partnership.

But you run into them again. Shackled again.

But if you free them a second time, there is a happy ending to the random encounter. Later you’ll find they’ve turned an abandoned cabin into a home and are living happily ever after as the most unlikely of friends.

The 1890’s weren’t the most progressive times. So it’s no surprise you have a few random encounters with the KKK.

And they all end comedically.

On one occasion, I snuck up a group that was about to light a cross on fire. In the process, one of the members lights their rob on fire and while flailing manages to set a second member on fire.

Some random houses have loot. Some have hidden cheat codes. And some have nothing.

But one has a bear. So watch out for that.

6. Stranger Gets Kicked in the Face

It’s a relatively common random encounter, but this one cracks me up every time I see.

A stranger parked on the side of the road is trying to fix reattach a horse shoe when his horse kicks him right in the face.

Needless to say the stranger doesn’t make it through that.

7. Friendly Stranger Tells You About a Mystery Treasure

Most people at random campsites aren’t too friendly. But you might run into a Mexican fellow who tells you a story about 3 brothers.

Story goes: 3 brother find a bunch of treasure. Consumed by greed, one tries to run off with it all. He marks where he’s hiding the treasure with tree carvings, but the other two brothers catch him in the act.

Now all three brothers are dead, and the treasure has never been found…

You’ll come across a man hanging from a tree in the Lemoyne forest.

Once you go to check out the body, you’re ambushed by attackers from all different direction.

Surviving this random encounter requires some quick shooting. I managed to put one down but had my throat cut from behind within a couple seconds.

9. Feeding a Corpse to Pigs

A prostitute in Valentine asks for your help to dispose of a man’s corpse. Do you hide the body in a barrel or bin somewhere? Nope. You feed him to pigs.

If that’s a bit too gruesome for you, you can tie up the prostitute and take her to the sheriff for a reward. The woman is unsurprisingly unhappy to go. Probably because she’s publicly hanged soon after.

At a river west of , you’ll find a naked feral man with two pet wolves he raised.

If you follow the man to his cave for some loot, but he may set the wolves to attack you. Killing the wolves earns -2 honor.

11. Angry Guy in the Valentine Saloon

There’s an angry fellow in the Valentine saloon shouting at everyone around in the bar. Generally not a pleasant guy.

But he does have a really nice hat.

He’s a good fighter with a strong jaw, so bring your ‘A’ game. But damn, it’s a nice hat.

Deep in the woods you may find a cabin where you can hear a man shouting from inside. Approach with caution because he’ll busting through the door and one-shot you with the Rare Shotgun.

Unsurprisingly, it’s also the only place to get the Rare Shotgun.

Just when you thought you’ve seen it all. Boom. A ghost train.

There are the 13 best Red Dead Redemption 2 random encounters, which was your favorite?