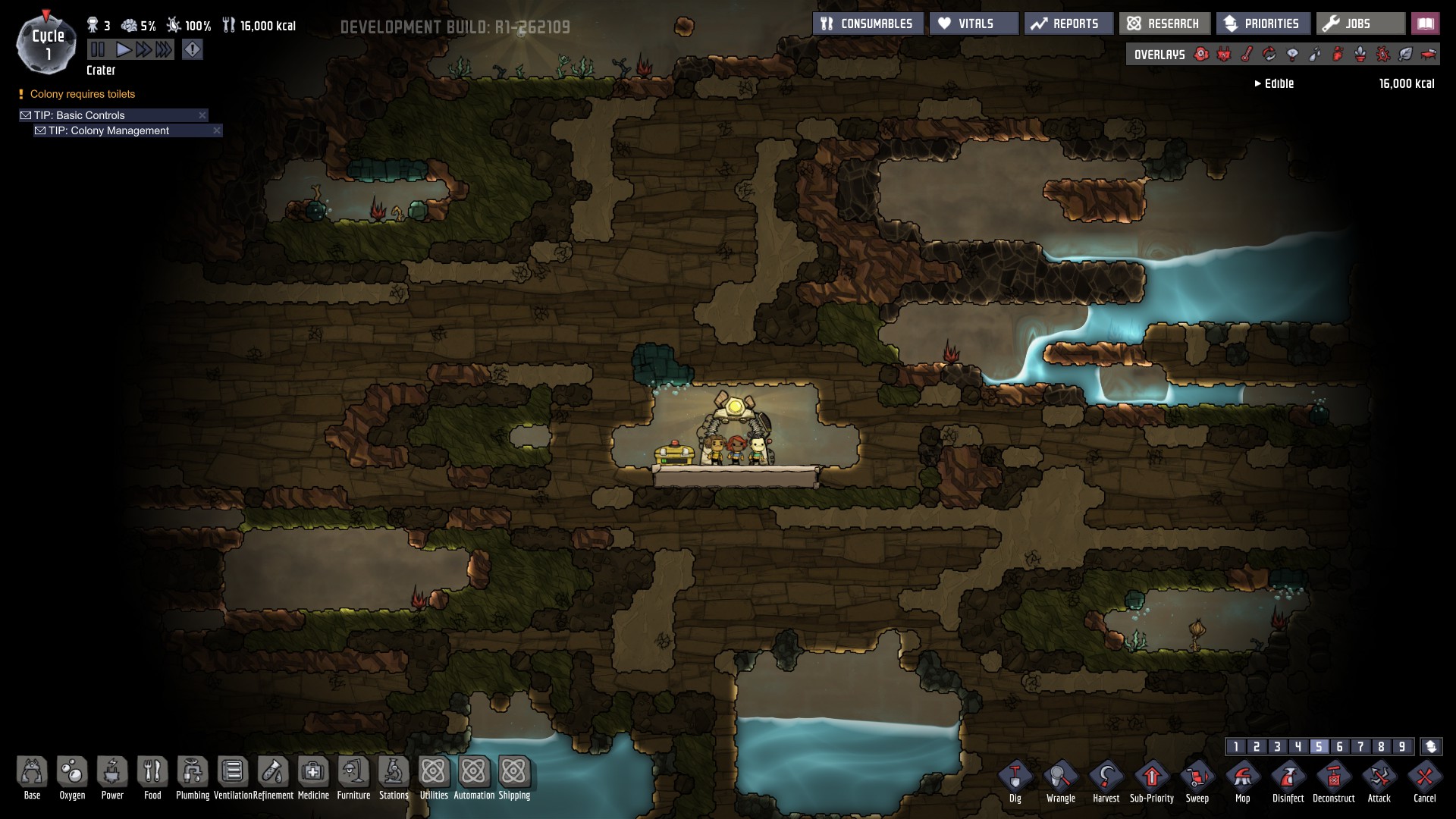 Everyone is sick and starving – they’re shitting themselves from eating nothing but dirt and water for the past week. Someone pissed in the drinking water. And they’re running out of oxygen.

Oxygen Not Included is a base building, colony survival game made by Klei Developers, the makers of other great titles like Don’t Starve and Invisible Inc.

The game starts by warping 3 unsuspecting “duplicants” deep inside an unknown space rock where you start building the most basic aspects of your base – beds, an outhouse, and a water pump.

As the days (called “cycles”) progress, you begin expanding your base, warping in new friends to join the colony, and researching new technologies.

Before starting a new game you first have to pick your original 3 colonists. You randomly shuffle through pre-made characters until you have a nice balance of stats – these are your OG colonists so it’s worth spending a minute or two finding some good ones (pro tip: avoid having a flatulent starting character because their farts will cause a build-up of natural gas). 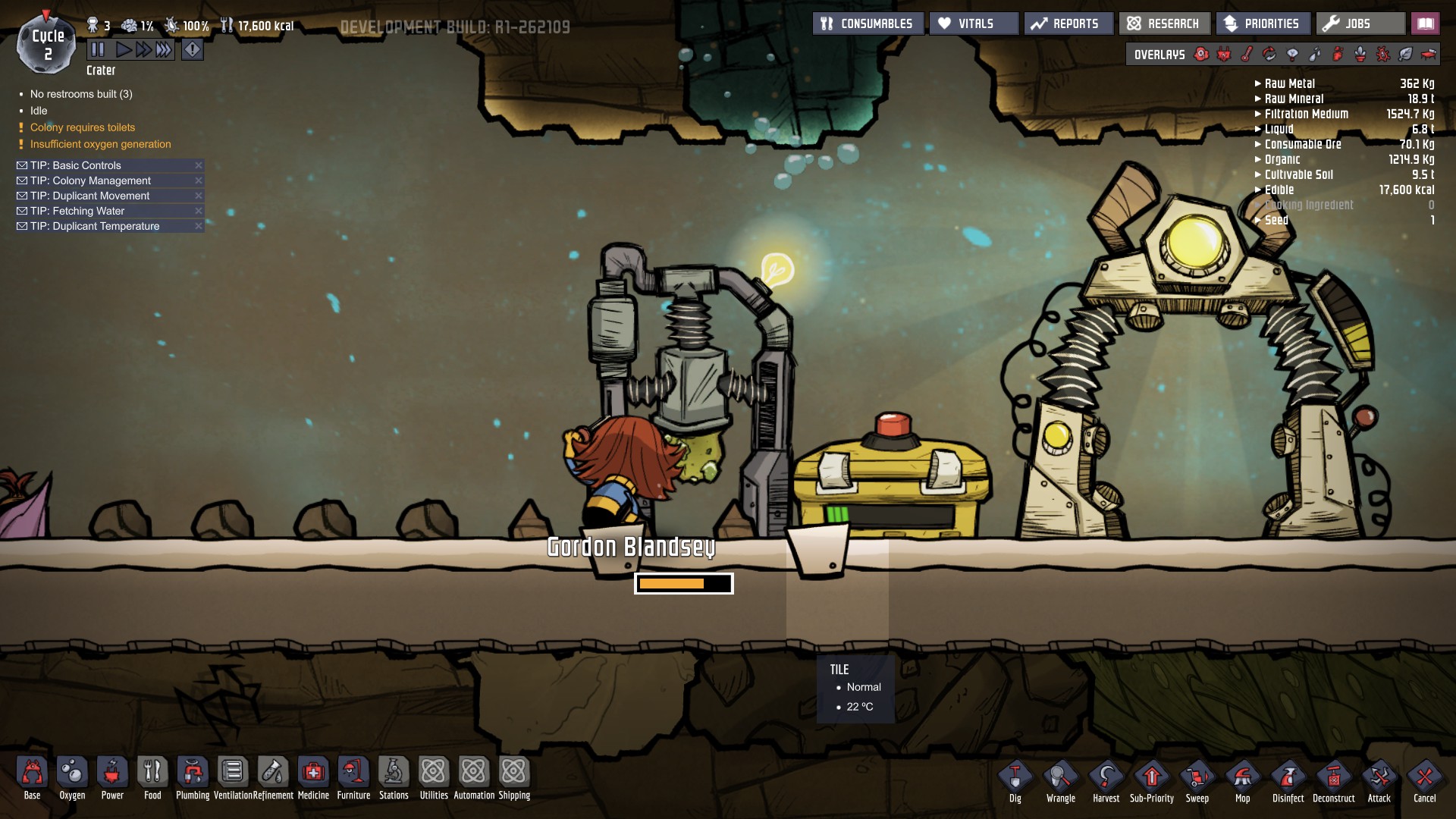 The maps are randomly generated so your starting area, the water deposits, and resources will be different every time you start a new colony.

Regardless of the layout, in the beginning, you’re working to set up a fairly small and primitive base.

Dig out a hole in the rocks to make a barracks with a few beds. Build a latrine with an outhouse and wash basin. Get some power going from a manual generator and battery. Then start making some “food”, otherwise known as horrendous green mush bars made from dirt and water.

From there the game can go one of two directions: either your superior colony management skills lead you to build a thriving community with specialized workers and an abundance of resources, or the colony spirals to its doom. But even if things do go south, this game makes battling for oxygen and drinking pee-water survive more fun than you can imagine.

One of the unique aspects of the game is the surprisingly complicated heat and gases dynamics.

Various machines and biomes produce heat which, if not managed effectively, can eventually burn your colonists alive. What materials you use to build tiles, pipes, and machines themselves will influence how much heat is produced and how well that heat transfers to whatever it’s touching. This complexity means you can create some fairly interesting systems, like heating water to kill germs and then pumping it through cold zones.

Gases have a similar complexity. Not only do the various gases have different weights and freezing points, but how they spread and interact with other gases is also quite interesting.

I have to give some props to the makers of the game here, Klei Developers. While Oxygen Not Included is still in early access, they have been pumping out high-quality updates and new content regularly. I picked this game up shortly after release and have been thrilled with how the game has evolved since then.

What Other’s Have to Say

This game is very addictive. The first time is the worst, but you get better fast. Once you learn the basics, the game starts to open up. You have to work with what you have, and it is a challange. You would be amazed how much you learn in actual real world science as well. The fact that this game is still in early access is great, because there is going to be more content in the future. I love this game very much.

Ellie, my researcher, has hit a wall. Literally, I mean. Completely stressed out, she’s left her work station and is running around the colony, punching random blocks with her fists, slamming her head against them in frustration, and pausing periodically to try to compose herself (and failing) before continuing her rampage. As she dashes around in a blind rage she even delivers a few vicious blows to the colony’s manual power generator (it’s like a huge hamster wheel) before another, more level-headed colonist hurriedly steps in to make repairs. Eventually Ellie runs over to the massage table, where I’m happy to see that rather than punching it to pieces, she climbs aboard for a stress-relieving mechanical back-rub. The Ellie problem has been temporarily resolved but a new issue crops up: Otto, another colonist, has gone from stress burping to stress vomiting. That’s probably not a good sign.

I played it for three days straight. Reluctantly, I figured I really ought to stop playing, and maybe, actually write something. To be clear, this is a really good game.
This shouldn’t be entirely surprising, since it was developed by highly regarded Canadian team Klei Entertainment, best known for Mark of the Ninja and Don’t Starve. Oxygen Not Included shares the kooky art-style and ready wit of those games, as well as a ferociously tight user interface and smart pacing